Tiago de Oliveira Pinto is a stocky man, he has brown wavy hair and an aged smile. He is well dressed in a blazer, powder pink shirt and shiny shoes. His strong posture and style emanate his presence. His accent is thick; he isn’t from around here.

On Thursday, 6 August, Pinto held a lecture at Rhodes University’s Beethoven room. Pinto had been at Rhodes all week giving lectures and working with music students..This was his last opportunity to share his experiences with anyone from the public.

The small audience listened  attentively as he spoke about the African influences in South America. Pinto focused on three things: the understanding of African music in the transatlantic perspective, the transcultural process, as well as the cultural heritage that developed in South America, particularly in Brazil.

The history of Africans in South America is one of hardship and struggle. The slave trade, initiated by the Spanish and Portuguese colonisers, forced many Africans to be dispersed throughout South America. Six  million African slaves crossed the South Atlantic to Brazil between the 16th and 19th century. Castes of Africans formed in Brazil, disparate cultures to developed.

Among the many cultures bubbling in the mixing pot were  the Quilombo people in Alagos, Brazil. This group  included almost 50 000 refugees. Led by Zumbi Palmares, a 17th century revolutionary figure, the caste created a home for runaway slaves and marginalised victims of the Portuguese regime, which included Brazilian aboriginals, Jews and Arabs.

“The Portuguese colony tried to destroy this village [of the Quilombos] and, in almost 100 years, they succeeded. And of course, this part of Brazil became a kind of myth because Zumbi Palmares was very brave, and he resisted the Portuguese for a very long time,” says Pinto .

Palmares serves as a mythological figure, the face of a multifaceted society. His image is revered by the Brazilian youth, where their cultural practices continue to change and develop, moving away from the Catholic values of their forefathers. These young and vibrant Brazilians have found patronage in Africa and what it represents; struggle, colour and freedom.

As of 2003, the Brazilian leftist government has officially recognised people of Quilombo decent, allowing for people to gain ownership of their ancestors’ land. 750 communities are currently officially recognised as Quilombo with approximately 4000 applicants still under investigation. The history of the Quilombo people has also only recently been implemented into school curriculums.

Pinto establishes that “the younger generation is embracing their culture through music. They are constructing their identity and it is very political. They are expressing resistance.”

However, in order to build a different identity, the youth of the south of Brazil have created their own music in what they feel the African culture is like. This consists of  drumming . The boys play the drums while the girls dance. It is cliché of course, but “we must not criticize [as] this is all done by the youth”.  Pinto argues that this is crucial to their development and all done in good spirit.

The boys and girls welcome the struggle of daily life, often avoiding help from the Brazilian government. Their struggles give them pride and connects them to their African heritage.

The northern parts of Brazil are extremely diverse, allowing for 200 years of mixed cultures with historic and genetic Portuguese influences. The Afro-Brazilian movement spread across Brazil. It started with the establishment of a group called Olodum in Salvador in the northeast part of Brazil. It is still known as Bahia by the locals. The group combines a marching-band-like drumming  with an accompaniment of vocals. They created  a voice for the youth since 1979. The group also played a significant role in the global Pan-Africanist movement during the 80s and 90s.

Olodum is renowned for their performance in the Michael Jackson music video, They Don’t Care About Us. Olodum also initially worked with Paul Simon, collaborating on his song, The Obvious Child.

Before a short Q&A, Pinto re-instated the value and progress of the Brazilian youth and the need to learn about the African cultures and histories:

“Brazil is starting to educate teachers to teach African history. On the other hand we have this movement which is very strong through music. Music is the strongest means to put identity on the streets, to show who we are and where we come from.”

Pinto has a PhD in Afro-Brazilian music and has been a guest professor and visiting scholar at the universities of Harvard, Leipzig, and Lisbon. He currently resides in Germany and has been the Head of the Chair of Transcultural Music Studies in the Department of Musicology at the University of Music Franz Liszt since 2009. 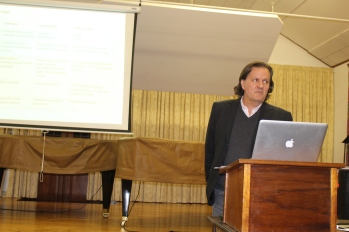 Pinto shows the different outfits in the northern parts of Brazil in his presentaton. 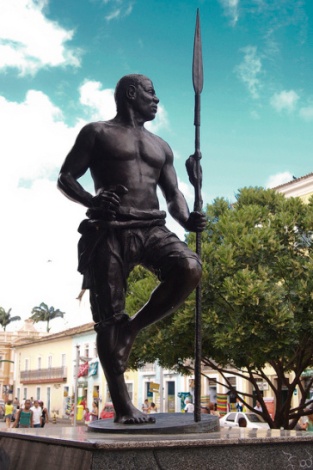 A statue of Zumbi Palmares in Salvador, Brazil. 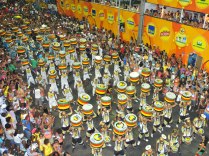 Olodum perform at the Salvador carnival in 2010 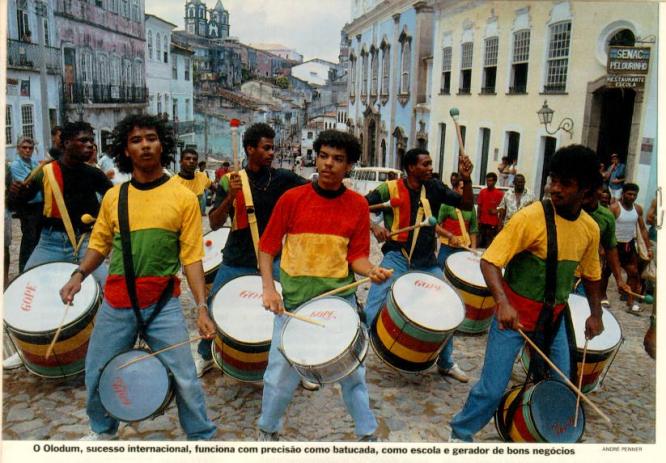